5.3 million Ukrainian citizens have fled to the EU since the beginning of the war in February. The total number of displaced people who have entered the EU, including also non-Ukrainian nationals, is 7 million.

In recent weeks more people have been returning to Ukraine than leaving the country. Between May 25 – 31, almost 260 000 Ukrainians exited the EU. In total, 2.3 million Ukrainians have returned to their home country since the war started.

As of May 23, the number of internally displaced people in Ukraine has decreased for the first time according to IOM observations.  The total number is now estimated to be 7.1 million, representing a decrease of 11% since May 3. 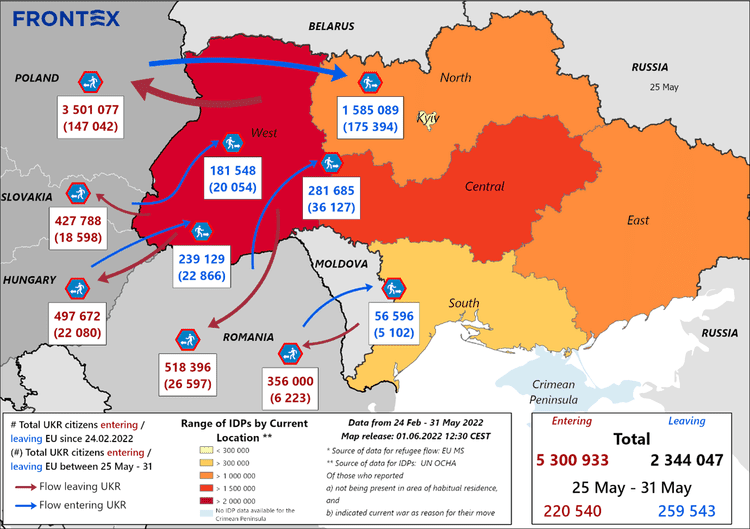 Poland and Romania continue to see the highest numbers of arrivals, with 147 000 and 32 800 Ukrainian refugees respectively crossing the countries’ borders between May 25 and 31.

Border traffic remains stable and there are no major border congestions. There are around 144 trucks with humanitarian aid entering Ukraine each day.

Frontex continues to monitor refugee flows to facilitate border crossings and support evacuation corridors. We have deployed 477 officers and staff all along the EU’s eastern land border, including 340 to countries bordering Ukraine, to support national authorities with border control.