Under a blazing sun, the victims of the earthquake have gathered on a high-level plateau at 2170m, surveying the damage to their homes and community. Two weeks after the disaster, the death toll had risen to 1,036 and more than 6,000 injured.

Zarlakht, a mother of six children, is one of the victims. Her house in the centre of Giyan was completely destroyed.

“When it started shaking, I ran out of my room and, when I went through the door, I saw that the roof had already fallen in. I grabbed my daughters, but we had no way to get out. It shook so hard I didn’t know where I was. I was screaming, I was crying – I thought the whole world had collapsed and there was no one to help me. My husband and several of my children were trapped under the debris,” she says.

Like many others, she had no choice but to pack up what she could and leave the remains of her home.

Together with her family, she set up camp nearby in one of the International Organization for Migration (IOM) tents. She is unsure about the future and how her community will rebuild after and recover from the disaster.

In the early hours of 22 June, the 5.9 magnitude earthquake struck in an underserved, rural area that is difficult to access. Aid workers continue to help the victims, but their efforts are hampered by the mountainous terrain and heavy rains that are common during this time of year. The survivors of Afghanistan’s deadliest earthquake in over two decades continue to wait in their devastated villages, without shelter, food, or water, for emergency aid to reach them, with heavy rains making the situation even worse.

The humanitarian community has mobilized funds and personnel for the response. IOM teams were on the ground in the affected area following the earthquake, weathering aftershocks alongside the affected community. Humanitarian actors are busy: meeting with community members to assess their needs, organizing the first emergency distributions and setting up tents, latrines and hand washing stations. Trucks loaded with a variety of kits are arriving in waves, having successfully navigated the remote mountains, riverbeds and roads that make this area particularly difficult to access. Thousands of people are trying to get the basic items they need for immediate survival – food, water, health care and shelter.

“I was in my house asleep when it started shaking,” says Krushnal, a survivor from Barmal, still living with his four children on the site of their collapsed house. “A piece of wall hit me, but I am not seriously injured. I saw bodies being pulled out of the rubble, injured people, and maybe dead people. I heard cries of pain everywhere I went,” he adds.

The majority of the fragile mud-brick houses in the area did not withstand the earthquake. While many currently lack the means to rebuild much of their community, the survivors have come together alongside humanitarian actors to plan for the recovery of the community.

The response by IOM and partners has revealed how crucial investment in rapid disaster response is. Quick emergency assistance can save lives and reduce suffering.

“I was in the forest when it happened,” says Zarmatgul, a 57-year-old man who was living in the Giyan district when the earthquake hit. “Stones were falling off the mountains. When we came back to the village, our homes were destroyed. Our children died; our livestock died. Death surrounded us. Our minds were damaged, and we were not able to sleep.”

On top of a ridge, a few kilometers from Giyan, IOM Mental Health and Psychosocial Support (MHPSS) staff are holding counselling sessions with victims amidst the remains of the rubble. The mountains appear behind the collapsed walls. Three distinct groups are formed for the sessions: women, men and children.

“Our hearts were reassured by the counsellor who is giving us more and more confidence,” adds Zarmatgul.

The group of women holds hands as they breathe in deeply. After all the noise and chaos in the aftermath of the earthquake, time stands still for a moment. Guided by an IOM psychosocial counsellor, the women begin to process their stress and pain in a safe environment. 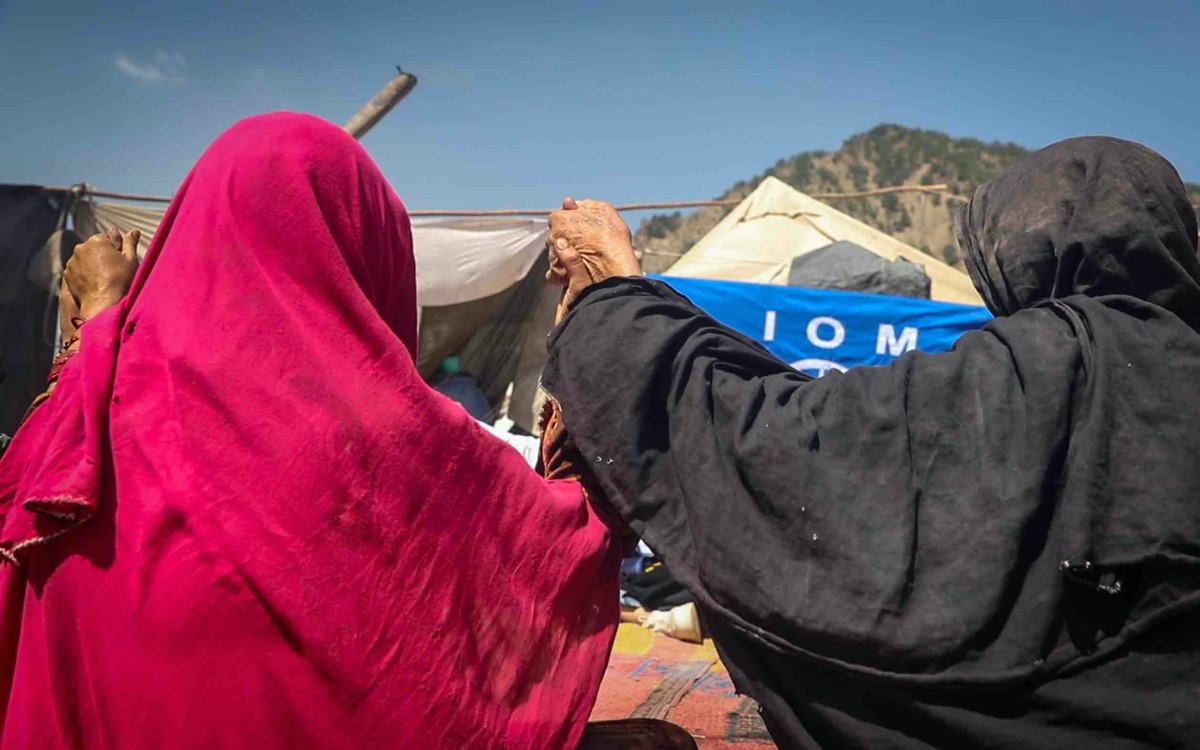 A group of women holds hands as they breathe in deeply, guided by an IOM psychosocial counsellor. Photo: IOM/Léo Torréton

Mobile clinics have been operating in this mountainous area, which is located far from health centres. In addition, community members have identified psychological support as a key need, which has been included in the IOM earthquake response from the first day. Thanks to IOM’s network of pre-positioned items and mobile teams, the organization has been able to rapidly mobilize and deploy to the area since day one of the response. As of 8 July, 140 trucks have successfully reached the impacted areas of Paktika and Khost provinces. Some 30,000 emergency shelter and non-food item (NFI) kits have been distributed to 5,600 families in need. 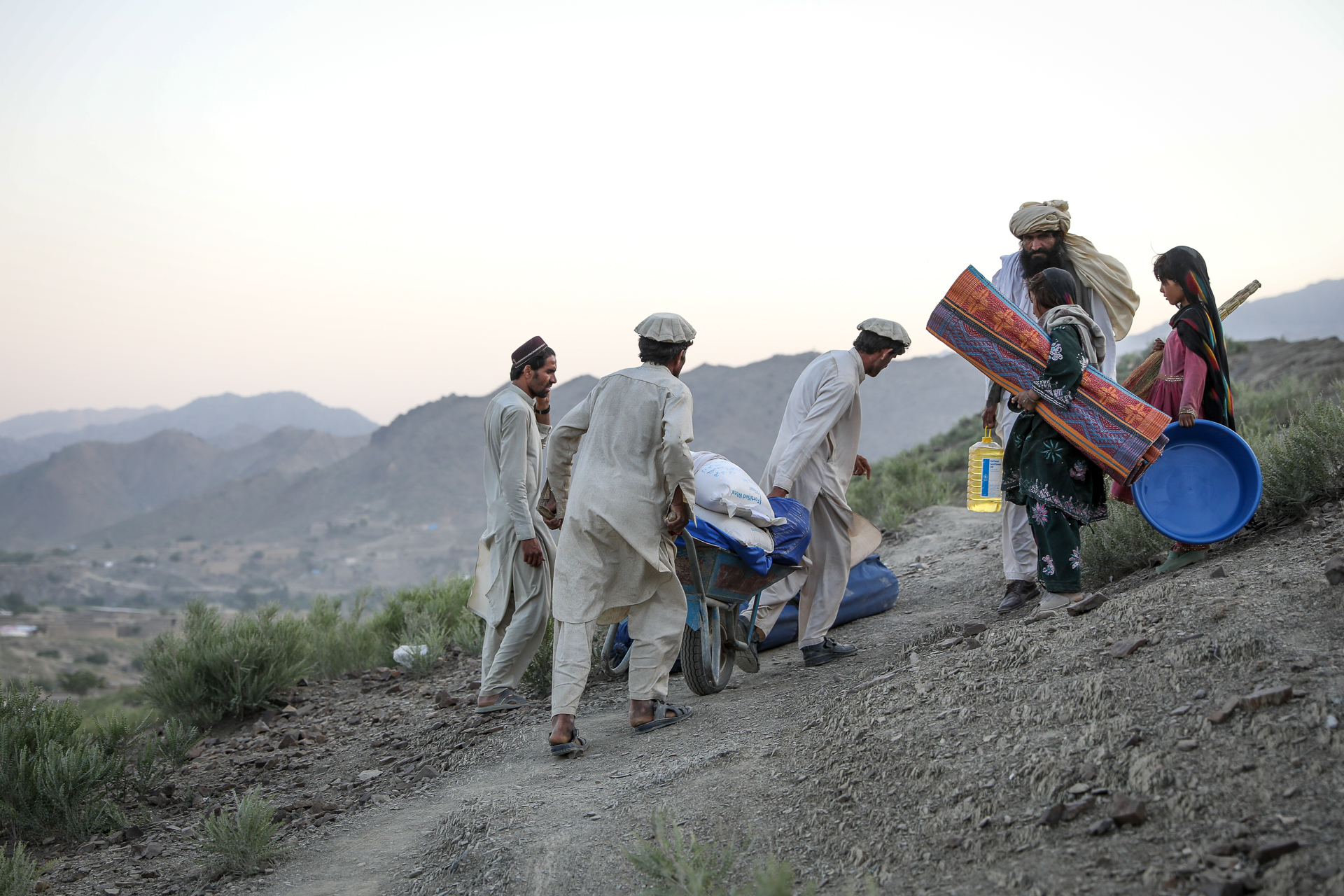 As the emergency relief items have been delivered to ensure families have a safe place to sleep and a way to feed their family, the focus switches to post-disaster longer-term rebuilding of houses, and of lives. IOM and other shelter actors are working together to support the communities to clear the rubble of the damaged homes and to build back their homes safely.

Other public infrastructures will also need to be rehabilitated to ensure communities can return to normal. Water sources that have been contaminated must be treated and fixed to ensure access to safe and clean water again – this is now more important than ever with cases of waterborne diseases on the rise in the area. Ensuring safe access to schools for children will also be important to safeguard the communities’ future.

Repurposing of existing emergency funding has enabled IOM to undertake a swift, immediate response to provide life-saving assistance to affected communities. However, longer-term funding from both humanitarian and development actors must be committed and made available immediately to ensure that houses and essential community infrastructure can be rebuilt before the harsh winter of Afghanistan arrives in November. Fresh batch of Nigerians for deportation from Munich tomorrow